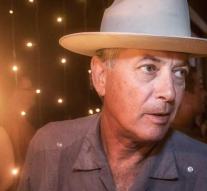 - Larry Harvey died on Saturday at the age of 70 in San Francisco. The founder of the world famous Burning Man festivals did not surpass the stroke he received on April 4.

'We continued to believe in a miracle. If someone was persistent, strong-willed and stubborn enough to come back from this challenge, it was Larry, 'is on the Burning Man website. Unfortunately it was not allowed to happen and Harvey died in the presence of his family.

'Larry would have been the first to say that this is not an end, but the beginning of a new chapter and that we can all determine how things are going now', says Marian Goodell, director of the festival, which has been organized since 1986.

The first Burning Man took place on the beach of San Francisco. Harvey wanted to 'fire a man', on which a three-meter high wooden figure was built and put on fire. After a few years San Francisco forbade the festival, which then moved to the Nevada desert. There it grew to an annual meeting of about 70,000 people, who partied for a week.