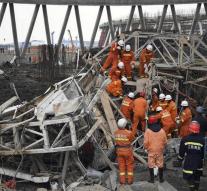 - In a serious accident at the construction site of a power plant in eastern China on Thursday morning (local time) at least 40 people died. A scaffold of a cooling tower of the Fengcheng Coal Plant would have collapsed in Jiangxi Province.

Also, several people were injured and about an unknown number of people are still trapped under the rubble.

Fatal accidents on construction sites in China are a regular occurrence and the anger at the poor security of employers increasing hand over fist. President Xi Jinping said last year that he would take additional measures.

The cause of this accident is still unknown. The rescue operation is still in progress.