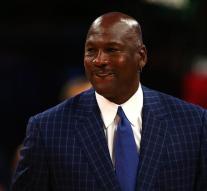 chicago - A pair of used and signed basketball shoes from American basketball legend Michael Jordan were sold for almost 170,000 euros on auction. It is the highest amount ever for shoes that have already been played in a match.

The basketball player carried the shoes in a match against Spain in 1984 at the Olympic Games in Los Angeles.