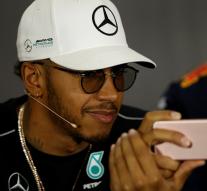 The highest sports class has concluded an agreement with the parent company Snap Inc.- Known for \u0026 nbsp; Snapchat, the popular communication app. From the current Silverstone Grand Prix, there will be images that users have made during the race weekend.

Also, during the upcoming GPs from \u0026 nbsp; Singapore, Japan, USA, Mexico, Brazil and Abu Dhabi, the two parties work together. Formula 1 hopes to reach a larger young target group.

In addition, sporting F1 director Ross Brawn has indicated to want to do more with video games. For example, the former team boss proposed to test important changes in realistic racing games. In addition, he wants a virtual Formula 1 running parallel to the regular Grand Prix season.