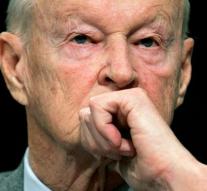 washington - Zbigniew Brzezinski, former security adviser to US President Jimmy Carter, died on Friday at the age of 89. That has revealed his daughter Mika on social media. 'My father went peacefully tonight,' she writes on Instagram. It is not known what the exact cause of death is.

Brzezinski was the National Security Advisor from 1977 to 1981, and as such, among other things, involved in the Camp David agreements concluded between Israel and Egypt. At the time of his appointment, the Iranian Revolution also took place, with the country turning to the West.

In 1981, he received a presidential prize for the role he played to normalize relations between the US and China. Brzezinski was born in Warsaw in Poland in 1928.