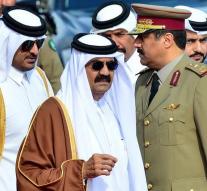 doha - At the age of 84 years Sunday, the former emir of Qatar, Khalifa bin Hamad Al Thani, deceased. This was announced by the royal family of the Gulf state. There are proclaimed three days of national mourning.

Sheikh Khalifa bin Hamad Al Thani was put aside as emir in 1995 by his son, Hamad bin Khalifa Al Thani when he was in Switzerland. He was previously 23 years in power and modernized the country. Since 2013, his grandson Tamim bin Hamad bin Al-Thani, the Emir.

Qatar has developed since the 50s of an arm sparsely populated peninsula to one of the richest countries in the world with nearly 2 million inhabitants.