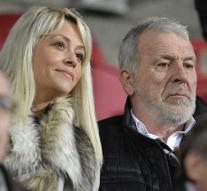 - Former PSV player Eric Gerets (64) has filed a complaint against his former teammate Gilbert Bodart (55). This because of repeated death threats to his address and that of his girlfriend Virginie, also the ex of Bodart. 'I am going to kill you, Bodart called several times. I have never known anyone so aggressively. '

Gerets knows that filing a complaint against his former colleague of Standard Liège and the Belgian national team has consequences and will make Bodart even worse. 'I have no other choice and on Monday morning I went to the police in despair,' says the former PSV player and trainer. His voice betrays unrest.

At the age of 64, Gerets thought he would enjoy his football pension. No longer to be found in the dug-out, but every two weeks in the grandstand of his beloved Sclessin in Liège. Insiders already knew: Gerets had also found love again with the blonde Virginie Neuray (39), a policewoman from Ans near Liège.

And the fact that it is always discrete Gerets people has turned out to be the last months when the two always took place together in the Liège stands. The two are madly in love. More than that, they are going to marry themselves this summer, confirms Gerets.

One man does not grant the two their love happiness: Gerets' former teammate Gilbert Bodart. The two played together for two seasons at Standard Liege and also played the World Cups of 86 (Mexico) and 90 (Italy). 'I have always found Gilbert a strange guy. But I never really had any problems with him ', says Gerets.