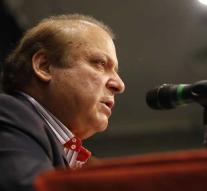 islamabad - Pakistani former Prime Minister Nawaz Sharif appealed against his conviction in a corruption case. The authorities arrested Sharif and his daughter Maryam when they returned to Pakistan late last week. Thousands of Sharif's supporters then took to the streets to express their support.

Sharif has been Prime Minister of Pakistan three times. The Supreme Court dismissed him in 2017 because he had concealed income. An anti-corruption court in Pakistan sentenced the politician and his daughter to prison sentences of ten and seven years earlier this month. The son-in-law of Sharif got a year in prison.

Lawyers from the trio have now appealed against these statements, the Pakistani newspaper Dawn reports Monday. They also demand that their clients be released on bail in the meantime. The legal jousting comes at a sensitive time. Pakistan goes to the polls on July 25th.