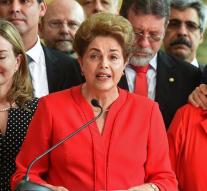 - Brazilian ex-president Dilma Rousseff goes against her deposition appealed to the Supreme Court. That has put let her attorney Jose Eduardo Cardozo know, immediately after the decision of the Senate Rousseff in her office.

Brazil's upper house voted earlier in the day by a large majority for the deposition of the leftist Rousseff. She might have been tampered with budget figures. The chance that the Supreme Court decides the Senate annuls is small. The court rejected earlier objections against the impeachment.