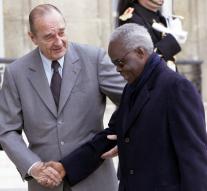 - Former President Mathieu Kerekou of Benin on Wednesday deceased at the age of 82 . Kerekou was decades in power in the African country.

Kerekou 's death was announced by President Thomas Boni Yayi , which proclaimed seven days of national mourning . Yayi did not mention the cause of death of the former leader. Kerekou , a general, came in 1972 to power through a coup.

He ruled the country until 1991, when the leader had to step down after elections . A few years later Kerekou returned to the plush . After he won the election in 1996 , he was allowed to call himself president again . This time he would remain in power for ten years . In 2006 he said goodbye to the presidency.

He was not re-election because the constitution stipulated that candidates must not be older than 70 .