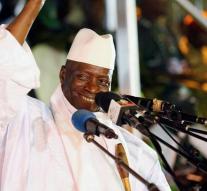 dakar - The former president of Gambia, Yahya Jammeh, has on state television announced his departure. He did this on the night of Friday to Saturday, after lengthy negotiations with West African mediators.

Adama Thursday Barrow was already president sworn in the Gambian embassy in neighboring Senegal. Mai Ahmad Fatty, Special Adviser to Barrow, told Reuters news agency that the former president would go into exile. 'I can assure you that he agrees with his departure. 'He could not say that Jammeh would go into exile.

The pressure on Jammeh to resign was high, especially after soldiers of the regional forces of ECOWAS (Economic Community of West African States) Thursday Gambia had entered. Gambia's army chief General Ousman Badjie that Jammeh continued to support long, Barrow has now been recognized as supreme commander and said, welcoming the regional troops: 'We welcome them with flowers and make a cup of tea for them. '

Barrow, who won the elections on December 1 with a small majority, soon after his inauguration to regional and international support. Shortly thereafter ECOWAS forces announced that they had entered the Gambia, which is almost entirely surrounded by Senegal. Later that day the operation was temporarily put stop to give mediation a chance. Friday negotiations took place between Jammeh and mediators, including President of Guinea Alpha Conde and Mohammed Ould Abdelaziz, President of Mauritania,.

'The reign of the fear forever banished from Gambia,' Barrow said Friday at a crowd in a hotel in Dakar. 'Anyone who was forced by political circumstances to leave our country, now have to return to freedom. '