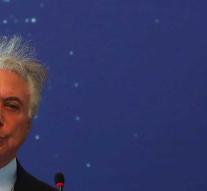 Many voters voted for his successor, Jair Bolsonaro, because he was one of the few leaders who was not associated with corruption.

According to Brazilian media, the federal police are also looking for Wellington Moreira Franco, who was Minister of Mining and Energy under Temer.