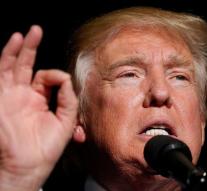 amsterdam - The former Miss Finland Ninni Laaksonen Donald Trump has been accused of sexual harassment. Laaksonen, making it the twelfth lady who pull the bell on the waiting Republican presidential candidate.

Laaksonen, who participated in the Miss Universe contest- until 2015 owned by Trump- says to the Finnish newspaper Ilta-Sanomat them for a broadcast of The Late Show in her rear was pinched by Trump. The Republican would have struck during a photo opportunity. 'Trump stood beside me and suddenly he squeezed my buttocks. I do not think anyone saw it, I was shocked and thought 'what's happening?' 'Said the woman.

Moreover, the woman says that Trump found her attractive because she reminded him of his wife Melania. 'I found that disgusting. '