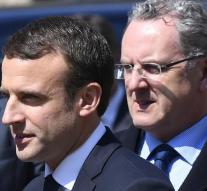 'I thank the delegates for their confidence,' wrote the 54-year-old Ferrand in a statement. He added that Macron's movement is committed to the people to be successful. 'The French have no message for good intentions. They want results. '

The transition from the former Socialist to the Cabinet to Parliament is striking. Ferrand joined Macron at an early stage and eventually received a ministerial post. He left the government last week after he was arrested for a real estate affair.

The issue turned out to be no obstacle to his appointment as president of the parliamentary group. Ferrand received the support of 306 parliamentarians from La République and Marche. Two party mates resigned from voting. Many LREM politicians are newcomers in politics.