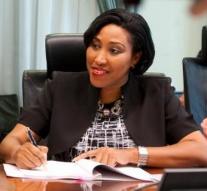 willem city - The Curaçao's former minister of health and current parliamentarian Jacinta Constancia was sentenced to eighty-five hours in Villemstad on Wednesday. In February, she collapsed Giselle Mc William in a parliamentary session and threatened another parliamentarian.

The Public Prosecutor had demanded a job penalty for two hundred hours, of which forty hours conditional, for the blow and the threat. The judge ruled that the threat falls under parliamentary immunity. For the blow she got eighty-one job penalty. She has two weeks to appeal.

The clap was filmed and appeared on social media shortly thereafter. The message brought the media at home and abroad. Constancia was minister in the Cabinet-Schotte (2010-2012). She is currently suspicious in a litigation case that played during her ministerial period.

Mc William was hurt by the blow and had to be treated by a doctor. Constancia apologized several times and recently, the two embraced each other publicly.

Constancia returned to the MFK party after the incident, but did not accept the offer and left her.