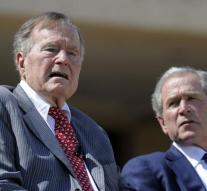 washington - In response to last weekend's violence in Charlottesville, US ex-president George H.W. Bush and George W. Bush in a joint statement that the United States should always reject racially intolerant and anti-Semitism. Father and son Bush refer to the Declaration of Independence, which states that all people are created equally.

The former presidents say they are praying for Charlottesville. In the city of Virginia, a demonstration of ultranationalists completely dismissed this weekend. A suspected right-wing extremist drove a car on a group of counter demonstrators, causing a dead to fall. In total, a dozen people injured themselves by the riots.

The Republican former Bush presidents are party fellow members of the current head of state Donald Trump. That showed understanding for the right-wing protesters protesting in Charlottesville against the removal of a statue of General Robert E. Lee, the military leader of the southern states in the US Civil War (1861-1865). Trump: 'Washington and Jefferson also had slaves. Do they have to leave their statues? '