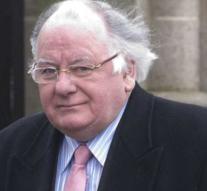 london - The former speaker of the British House of Commons Michael Martin died at the age of 72 after a short illness. That is what his family has announced Sunday, according to British media.

Lord Martin of Springburn was chairman of the House of Commons between 2000 and 2009 and Labor Member of Parliament on behalf of Glasgow, his hometown. He resigned because of a scandal around declarations. He was the first speaker in 300 years who resigned.