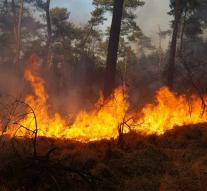 santander - In northern Spain 120 raging forest fires fanned by strong winds. Over eighty fires have been counted in the region of Cantabria.


The authorities announced on Monday there know that there are no homes in danger and there were no casualties. But the fight is very difficult at wind speeds up to 130 kilometers per hour. The largest fires in natural areas, particularly national parks Saja-Besaya and Los Collados del Asón.
The president of the regional government of Cantabria, Miguel Angel Rivera, said Monday that it assumes that there are fires ignited. The fire spreads quickly through a long period of dry weather in the normally very wet northern Spain.
NEW