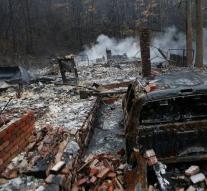 - When the fires in the eastern US state of Tennessee have been eleven deaths. The fires broke out Monday in the mountains and spread as a result of the strong wind quickly. Eighty people were injured according to local media due to the fires around the town of Gatlinburg. Wednesday there had been seven deaths.

Since Monday are sure seven hundred homes badly damaged or destroyed. Hundreds of families have been left homeless, according to The Tennessean. The cause is yet known. Police suspect the fire was caused by humans, but also overturned or fallen electricity poles have caused a fire in some places.

American country singer Dolly Parton, who grew up in the affected region, has people who lost their homes for six months $ 1000 per month relief promised.