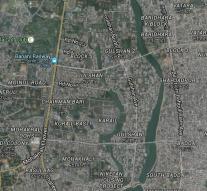 dhaka - In a restaurant in the center of Dhaka, capital of Bangladesh, have been taken hostage more than twenty foreigners. Local media reported that the attack on the restaurant in the chic neighborhood of Gulshan, where many diplomats houses, seems to have been done by terrorists.

There are several policemen were injured, according to the Dhaka Tribune.

In Islamic Bangladesh, there is increasing violence against activists, atheists and religious minorities.