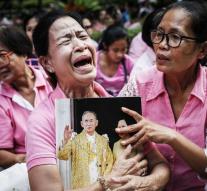 bangkok - Due to the death of the King of Thailand Bhumibol, Foreign Affairs adjusts the travel advice for Thailand. The Ministry advises travelers with terminal instructions to follow the authorities and to respect the restrictions imposed in public life. Those restrictions, such as abstaining from celebrating, after all, be strictly enforced.

Foreign Affairs also advises to stay away from statements or discussions about the monarchy.

'The next few days are very important given the political situation in the country and the succession of the king,' said Mr Koenders (Foreign Affairs), who just landed in Bangkok when the news of the king's death was announced. 'He was a highly respected and beloved prince who has long held the throne for 70 years. For decades, the King was a symbol of unity among the Thai people. He had behind the scenes considerable political influence. '

The Thai King death could plunge the country into chaos. Succession is not a foregone conclusion; the crown prince, who has a reputation of being profligate, is not very popular in Thailand.