Home / World / For the third night in a row house searches 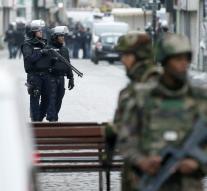 - In France performed for the third night in a row house searches. In the night from Tuesday to Wednesday carried out 118 searches on behalf of the Ministry of Domestic Affairs, bringing the total to 414 searches, reports the French newspaper Le Figaro. Last night 25 people were detained and 34 weapons were seized. Even drugs have been found.

In three days 64 people have now been arrested, of whom 60 are stuck. 75 weapons, eleven military, were confiscated. Over a hundred suspects have been under house arrest.