Home / World / For Russians Trump is the 'least bad' option 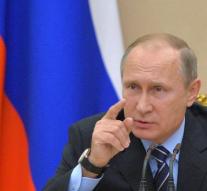 moscow - The Americans have chosen the right president in the eyes of the Russians to many unexpected victory of Donald Trump. Or, rather, the least bad.

Vladimir Putin vowed recently that Russia in no way intervened in the US presidential election. And no preference was who would win the race. The allegation that Russia have been behind the recent cyber attacks on the computers of the Democratic Party, where Hillary Clinton was discredited, he called absurd.

Donald Trump meanwhile definitely had preferred the Kremlin is fixed. 'He is the candidate of the people,' Putin did know. Unlike Clinton, who would be the symbol in his dynasty formation (after the Kennedys and the Bushes) in American politics. Trump's proposed policy of isolationism, which he NATO countries also ensured that they now own more of their defense would have to pay, the hardliners in Moscow sounds like music to your ears. The greater the divisions in the West, the better the Russians.

In recent years been characterized by attempts to restore the international prestige of the country, after losing the Cold War and NATO's eastward expansion, the foreign policy of Russia. A national humiliation itself in military revanchism. The set penalties like those in power to cold in the Kremlin.

After the annexation of the Crimea, Russia's role in Eastern Ukraine and Syria is Russia on the world stage all the way back. Trump is saddled with the legacy of those Democratic predecessor, Barack Obama, which advocated eight years ago for a 'reset' in relations with Moscow, an approach which has failed completely.

The property tycoon Donald Trump has advocated a far more friendly attitude to Putin than the current one. The two have, as populists, much in common. But at the same time plays the danger of (conflicting) egos. An upcoming romance might as well turn out to be over. And that between two alpha males with their hands on the nuclear button. But meanwhile pragmatism is likely to prevail. As the way to peace in Syria is running anyway via Moscow. Meanwhile, the Kremlin has begun a new romance with China, soon Moscow will deliver billions of dollars in weapons to Beijing, is a reality that even Trump will have to confront. He will, as every president in the White House, must navigate between promises made and pragmatism of realpolitik.