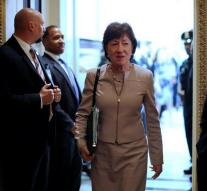 washington - The American Republicans must seriously take into account that their latest- and presumably preliminary last- attempt to restore Barack Obama's reform of care fails. Senator Susan Collins showed Sunday that she strongly rejects the new bill to replace 'Obamacare' by another system.

With a majority of 52 against 48, the Republicans can not afford more relegators: two party members have already declared themselves opposed.

In a conversation with CNN, Collins said it was difficult to propose a scenario in which she would vote for the proposal. The Republicans are under great pressure. After 1 October, another procedure applies, with a majority of sixty votes required for the implementation of new reforms.