Home / World / For over a thousand Iranians killed in Syria 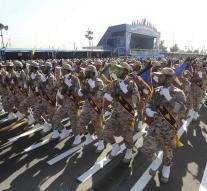 - For over a thousand Iranian soldiers were killed in the civil war in Syria, where they fought on the side of the regime of Bashar al-Assad. This has Mohammadali Shahidi said Tuesday, the head of Iran's Martyrs Foundation for financially supporting the bereaved.

The number of Iranians killed in Syria will rapidly increasing. Three months ago, the count was still four hundred.

Iran sends not only its own nationals to Syria to fight for Assad, but also Shiites in Afghanistan and Pakistan. Iran dubs them as 'defenders of the (Shiite) shrines,' as the Sayeda Zeinab mosque in Damascus, where a granddaughter of the Prophet Muhammad was buried.

With Assad had the Iranians initially little. But since the rise of extremist Sunni groups like Islamic State is the fight increasingly seen as a threat to the country which is fought best outside its own borders. There would now offer more volunteers than Iran is prepared to deploy in Syria.