Home / World / For now still soldiers on the streets in Brussels 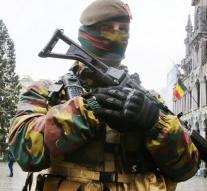 brussels - Soldiers continue at least next month set the scene in Brussels. The federal cabinet decided on Wednesday that they remain provisionally patrol arising from terrorist threat. The threat level in the Belgian capital is currently three, the second highest.

Belgium raised the alert over a week after the attacks in Paris on 13 November. Some offenders appeared to live in the Brussels suburb of Molenbeek. Since then, hundreds of soldiers patrolling the streets of Brussels. They monitor strategic places such as the Grand Place in the center, the European institutions and metro and train stations.