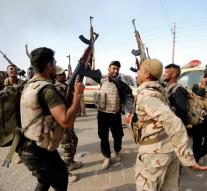 erbil - Iraqi forces snatch ever further towards the northern Iraqi IS stronghold Mosul. Iraqi soldiers and Kurdish peshmerga fighters have been freed fifteen villages around Mosul Islamic State. The city is since Monday the focus of an offensive against IS, because it is the last bastion of IS in Iraq.

The IS-fighters put car bombs, roadside bombs, mortars and snipers against the Iraqi army and their fellow fighters. The latter have access to much more modern armaments. One of the villages which have now reached Bart Ella. Which lies at a strategic point along the road to Mosul. Now this village is occupied, the possible liberation of Mosul also fast approaching.

Thursday morning had already known that the offensive against IS faster than planned in Mosul, Iraqi Prime Minister Haider al-Abadi. 'The armed forces snatch faster to the city than we expected and faster than we have programmed into our campaign,' al-Abadi told representatives of several countries met in Paris to consider the future of Mosul.

French President Francois Hollande warned that there are indications that IS fighters from Mosul are fleeing to the IS stronghold Raqqa in Syria. He said that everything possible must be done to prevent them from regrouping there.