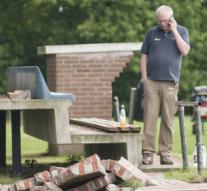 twijzel - The Frisian football club SC Twijzel be sued for a fatal accident in 2014. The dugout in a field when in collapsed, leaving a ten-year-old girl was killed. According to the court in Leeuwarden was the club 'significantly negligent and negligent,' the Leeuwarden Courant.

The prosecution had previously decided not to prosecute the club. The parents of the girl and injured several children got them to the court.

The accident happened during a korfball tournament for primary schools. The children sat on top of the stone dugout.