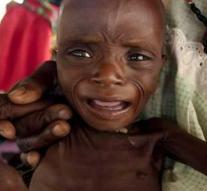 bamako - A quarter of the population of Mali suffers from a lack of food. According to the United Nations, 4.3 million people are dependent on aid, including 274,000 children who are threatened by acute malnutrition. At least € 85 million is needed to meet the needs. Of that amount is less than 6 percent.

Due to internal conflicts in the central part of the African country, a new refugee flow has started in the direction of Burkina Faso since mid-February. In the surrounding countries, 137,000 Malians are now living in the neighborhood because of the violence.