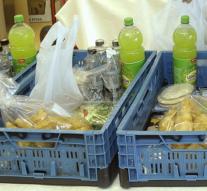 dachau - A food bank in the German town of Dachau refugees will not help . The food bank has previously pedagogical reasons: refugees must learn according to a spokesman with money to go .

The food banks in Germany give assistance to people who are entitled to an identification card and may determine who is eligible . Dachau is the limit now clearly drawn . " It involves the preparation of asylum seekers to stand on their own ", a spokesman for the Süddeutsche Zeitung.

The food bank receives from different sides accused of helping the refusal is racist. The national organization of food banks condemns the measure. " Refugees are as much needy people as poor pensioners or families. It can not be that poor are pitted against each other ", said President Jochen Brühl. According to the food bank in Dachau there is really no problem. " What we eat asylum seekers anyway. Wanting couscous and chickpeas. "