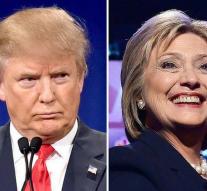 - The US presidential candidates Hillary Clinton and Donald Trump take tonight against each other in a televised debate. It is the third and last time they do so. From 03.00 you can live here follow the debate through the tweets of correspondent Herman Stam.

Hillary Clinton is in almost all the polls in the lead. The question is whether Donald Trump remember to give something back.

There will be debated on benefits, immigration, the economy, the Supreme Court, foreign policy and how the presidential candidates. The six topics of the debate have been selected by moderator Chris Wallace, host to the conservative news channel Fox.