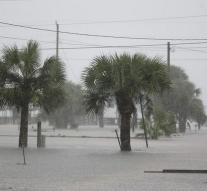 tampa - Residents of the US state of Florida prepare for the arrival of Hermine, the first hurricane which will probably take the state in more than a decade. People store massive food and low-lying areas have been evacuated. Gov. Rick Scott warns,, perilous storm. Hermine is expected Thursday night or Friday morning local time on land in the northeast of the state.

The authorities in 51 of the 67 municipalities in Florida declared a state of emergency. If Hermine comes ashore, there may be parts of the state more than 50 centimeters of rain fall.,, This is a fatal, life-threatening storm, 'said Scott. Eight thousand soldiers of the National Guard have been deployed to help to take precautions.

Several states are at risk. Hermine will probably withdraw after Florida including to Georgia. For parts of North Carolina storm warnings are in effect.