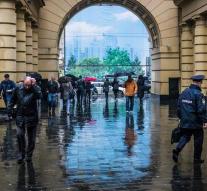 moscow - In the Russian capital Moscow on Friday, 100,000 people were evacuated after fake bombings. In total, there are more than one hundred reports.

For several weeks, the capital is flooded with false reports. However, as much as today, it has never been. Numerous airports, hotels, stations and other public occasions were evacuated. Nowhere was there actually a bomb.

According to the head of state security service FSB, Alexander Bortnikov, the telephone threats from Russians abroad, with accomplices in Russia, or those who take the 'joke' are taken.

There is also a lot of speculation about a pre-planned plan of Russian enemies, such as Ukraine.