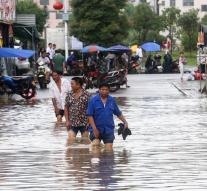 peking - Floods still hold the middle and south of China in the grip. Due to the continuing heavy rainfall, at least 56 people have died, the Chinese authorities reported on Tuesday. More than twenty others were missing. Nearly 100,000 Chinese are in flight for the emergency weather.

The southern province of Hunan is considered the most affected region. There, the River Xiangjiang ran outside its banks, houses collapsed as a result of the flooding and trees were rooted.

According to the Chinese authorities, the water level in more than sixty rivers is at an alarming high level. The rainy season of rainy monsoon began last month and lasts for a while.