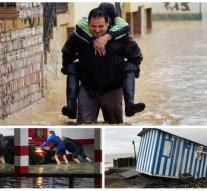 - Torrential rain has caused flooding in the vicinity of Malaga, Spain. Authorities have issued the highest weather alert.

On television Sunday were shown images of flooded streets where the cars drive through it. There are more than 600 reports of nuisance.

Most affected are the areas around Malaga and Marbella.