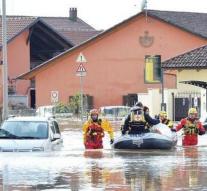 - Rome Water Over Nuisance certainly four hundred people homeless in the provinces of Cuneo and Turin in northwest Italy. Several villages have been cut off from the outside world, according to the Italian news agency ANSA on Friday.

The regions of Liguria and Piedmont, where the provinces of Cuneo and Turin are, faced with heavy rainfall with severe floods and other forms of flooding. The rivers Po and Tanaro entered in different places outside their shores.

According to the authorities, the damage incurred by the storms to more than 100 million euros. Numerous roads and bridges are impassable

A 70-year-old man was swept away by the water when he wanted to get some horses from the pasture. He's missing.