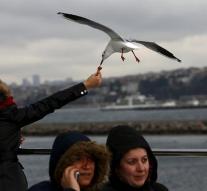 - And from Istanbul on Wednesday a large number of flights fell through because of snow. Also Thursday, when snow is expected to fall further, providing an air traffic disruption.

Turkish Airlines announced Wednesday that it had canceled nearly 200 flights and budget airline Pegasus did it with 33 flights, the newspaper Hürriyet. It was mainly for domestic travel, but also to international destinations.