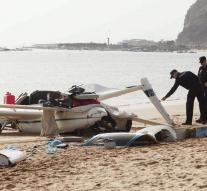 santa cruz - Bathers on the Canary Island of Tenerife Tuesday escaped a disaster when it collapsed on the beach at Santa Cruz a plane in the sand. In the small plane was a French-Belgian couple and a 14-year-old child. The plane hit the emergency landing in the sand over.

The passengers were injured, but are not in danger. Two beachgoers were hit by the debris and were slightly injured. It was quite busy at the time of the crash.

'The plane was flying low over the sea and came straight at us. The pilot had the device under control. It wobbled huge, 'said a startled tourist in Spanish media.

The plane was in the hours preceding the crash took off from Los Rodeos, an airport in the north of Tenerife. Air travelers were heading to Morocco. According to local authorities, it is a wonder that there are cases, no deaths.