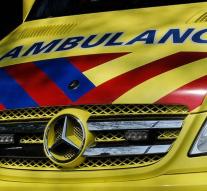 stekene - How much can one family endure? For the third time Willy lost father and mother Kris from the East Flanders Stekene Tuesday a child in a tragic accident. Their 26 year old daughter just lost her brother and sister control of her steering.

Her car was in the Dutch Axel upside down into a ditch. She was rushed to hospital, but later died from her injuries.

'This is the third child I lost. I really do not know how far my strength yet reached, 'mom Kris tells Het Laatste Nieuws.

The family had claimed the newspaper nine children. Eighteen years ago, fate hit the first occasions when son Bram, just 19 slammed against a wall in downtown Stekene. No Joke daughter eight years later lapsed into a coma after she lost control of the car and was hit on the road. After eight months, she died at the age of 21.