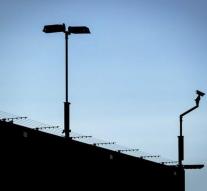 - "The Flemish Doping Agency has for the first doping discovered in prison last year. Twelve athletes who were checked in the fitness of an unnamed prison, five have tested positive for steroids. Four also had drugs in their bodies and athletes refused to issue his urine."

"This is stated in the annual report of the agency. How banned doping substances prison entered is unknown. Whether and how the prisoners are punished, is also unclear."