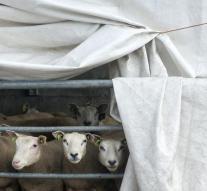 brussels - On Wednesday, the Flemish Parliament agreed almost unanimously with the prohibition of unmarried slaughter from 2019. From that year, anesthesia is mandatory for most animals, except for cattle and calves.

For years, there has been a debate about the introduction of a general ban on unintended slaughter in Flanders. The political support for such a ban has grown in recent years, but there have been legal objections and obstacles.

From then on, animals can only be ritually slaughtered after an irrevocable anesthetic technique such as electronic anesthesia. Because of that anesthetic the animal becomes insensitive to pain. For cattle and calves, the anesthesia technique is not yet mandatory and for the time being, anesthesia of the animal is used immediately after the neckline.

The slaughterhouses will have until 2019 to prepare their staff and infrastructure for the new way of slaughtering. The Jewish community and the Muslim community can count on guidance in applying the new rules.