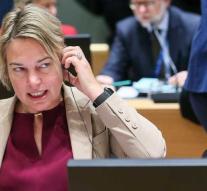 brussels - The Flemish government must make a plan within a year for better air quality in the entire region, otherwise a penalty of 1000 euros per day will be imposed. The court in Brussels determined that in a case that Greenpeace had filed.

According to the environmental organization, Flanders does too little against dirty air and insufficient measurements are made. In addition, the government would pass on too little information to the European Commission, although this is mandatory.

The judge ordered the results of measurements for 2016 that have been online since January to be forwarded within three months to the EU. This shows that the air quality standards are exceeded in several places, while action is not forthcoming. European rules prescribe that a remediation plan must then be drawn up.

The Flemish environment minister Joke Schauvliege is not worried about the verdict. She expects the air quality plan to get the green light this year.

The plan must halve the effects of air pollution on public health by 2030 compared to 2005. In this way, local environmental zones are supported by the government and wood stoves are gradually phased out. Schauvliege also promised that measurement results are passed on to the European Commission.

In the Netherlands, the judge ruled on Tuesday that the government should do more to significantly reduce CO2 emissions within two years.