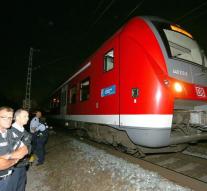 - German police found a homemade flag of Islamic State in the chamber of the Afghan teenager with an ax and a knife attacked passengers on a train in southern Germany. Has stated that the Interior Minister of Bavaria.

Seventeen-year-old migrant four people wounded in the attack Monday night at the Bavarian Würzburg. Two of them find themselves in critical condition. The victims come from Hong Kong. A special unit of the police, who happened to be nearby, shot the boy dead when he tried to attack them.

After the incident, witnesses stated that the Afghan Islamic slogans,, '' was uttered during his act. He would have called, among other Allahu Akbar (God is great). According to Minister Joachim Herrmann must now be examined whether the Afghan was radicalized and had extreme Islamic motifs. According to Herrmann acted Afghan teenager alone. He spoke of a terrible act,, so we have not experienced in Bavaria '.


The Afghan had traveled alone to Germany. He sat since March at a refugee center in Ochsenfurt. Two weeks ago, he was placed with a foster family.