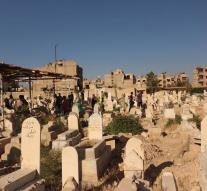 - Since the beginning of the civil war in Syria, 5.5 years ago, there are more than 301,000 people died. That said, the Syrian Observatory for Human Rights Tuesday.

The exact number of documented deaths condition according to the Observatory at 301. 781. The Britain-based organization, which relies for its information on activists in Syria, however, thinks that the actual death toll is around 430.000.