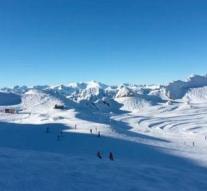 krimml - Five people died in the Austrian Krimml on a Sunday afternoon in a walk over a glacier. Presumably, the cord with which they were secured was cut off. A sixth person was severely injured and brought to Salzburg in Salzburg, reports the Austrian newspaper Salzburger Nachrichten.

The Austrian rescue services have deployed five helicopters to shelter victims. The identity of the victims is not yet known. Krimml is located in the popular ski resort of Zillertaler Alpen.