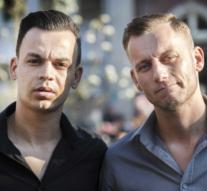 arnhem - Five underage boys will be prosecuted for violence against homosexuals Jasper and Ronnie from Arnhem. That has been announced by the Public Prosecutor. It is about three boys of 16, one of 15 and one of 14 from Arnhem.

The victims walked over the street in early April when they got it with the group of boys. The two got the stick with them, after which they were maltreated. Ronnie lost five teeth.