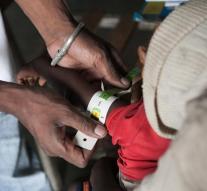 antananarivo - In Madagascar, five people have died of the highly dangerous and easily transmitted pulmonary disease. That released the World Health Organization (WHO) on Friday. According to local media, the pest eruption began in the province of Toamasina, in the northeast of the African island.

Also, there would be a lethal victim in the vicinity of the densely populated capital Antananarivo, where a run on antibiotics has now begun.

A spokeswoman from the Ministry of Health confirmed the deaths, but did not give details. Longpest is the most dangerous variant of bacterial infectious disease due to the transmission of infection by coughing or sneezing of human to humans. Patients should be treated within 48 hours, otherwise the disease is fatal.

Madagascar is one of the few areas in the world where the pestbacil still regularly makes victims. Usually it was about the bump fever, transmitted by rats. In a fast diagnosis, treatment with antibiotics is usually successful. Nevertheless, according to the WHO, around 500 deaths have been reported in Madagascar by the plague since 2010.