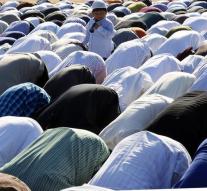 yaounde - By a suicide attack in a mosque in northern Cameroon Wednesday, five believers who were praying were killed.

According to the authorities, a young girl with a seat belt went in and blew up there. The action carries all the features of the Islamic terrorist organization Boko Haram.

The governor of the region reported that the bloody incident occurred in the Sanda-Wadjirimoskee in Kolofata just after the first call for prayer. According to him, the female perpetrator was twelve or thirteen years old.