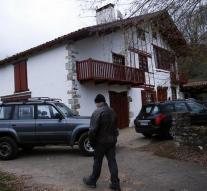 paris - In southern France, police arrested five people suspected of having links with the Basque separatist group ETA. The police operation were also large quantities of weapons, explosives and ammunition were seized. Reported that the French Interior Ministry Saturday.

The Spanish Civil Guard police, three of the five people were arrested in a house in the Pyrenean border municipality Louhossoa, near Bayonne. Two others were caught on the run.

ETA is blamed for the deaths of hundreds of people during the campaign of terror to enforce an independent Basque country in northern Spain. In 2011, the movement declared that they had ended the violence.