Home / World / Fit For Free is filming in changing rooms 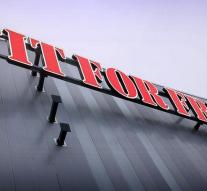 amsterdam - In 19 offices, Fit For Free has camera surveillance in changing rooms. The fitness chain explains that the cameras never focus on shower cubicles, but at one location it appears to have been the case. In the meantime, the cameras would have been taken away.

According to the gym, preventive camera surveillance is necessary against theft, but experts think otherwise. Vincent Bohre of Privacy First calls it 'scandalous'.

'People will behave differently even when the cameras stand out. It is awaiting excesses that leak out images and exploit an employee. It's all sensitive information about people without clothes, 'he says to RTL News.

On her website, Fit For Free first wrote that the surveillance cameras in dressing rooms 'focused on brackets for coats and thus only the face was taken'. The conscious text has now been removed and modified in that 'the cameras never focus on the shower rooms' and that 'customers have the opportunity to dress in a different room'.